An Empire Built on Punched Cards

Sometimes parodied outside the company, the classic IBM “THINK” sign was a feature in many IBM offices from the 1920s to the 1970s. The "THINK" concept, reflecting the company mantra of individual initiative, originated by IBM founder Thomas J. Watson, Sr. when he was at NCR. Shown here are “THINK” signs from around the world in Chinese, French, Portuguese/Spanish, English, and one written using Braille."

An Empire Built on Punched Cards

Under chairman Thomas Watson, Sr., IBM wasn’t just a company. It was a way of life. And Watson was its guru.

It was Watson who in 1924 renamed Hollerith’s Computing Tabulating Recording Company as International Business Machines (IBM). It was he who, as IBM Chairman until 1956, forged and enforced IBM’s obsession with efficiency and customer service. Karsh, an Armenian immigrant to the US, was a legendary photographer. Others he photographed the same year as Watson include Pope Pius XII, Bertrand Russell, and Prime Minister Jawaharlal Nehru of India. In the 1930s, IBM still offered products made by the companies it had acquired. Here, you can see not only tabulating equipment, but also scales, time clocks, and restaurant equipment. Thanks to the merger of several firms, C-T-R’s product line included a wide range of timeclocks and scales in addition to tabulating machines. Watson gradually shifted the focus to tabulating – and later, computers – but some of the other product lines lasted a long time. IBM’s Time Equipment Division was sold to the Simplex Time Recorder Company in 1958, almost 50 years after the merger. Early versions of this keypunch put round holes in 45-column cards. When IBM switched to 80-column cards with rectangular holes in 1928, many machines were reconfigured to the new standard, including this one. The Type 11 was the first electrically-powered IBM punch, which relieved operators from making the punches using muscle power. Tom Watson’s “THINK” motto, prominently displayed on signs at IBM offices around the world, also appeared on lots of trinkets. This notebook would have been given to Customer Engineers or salesmen. 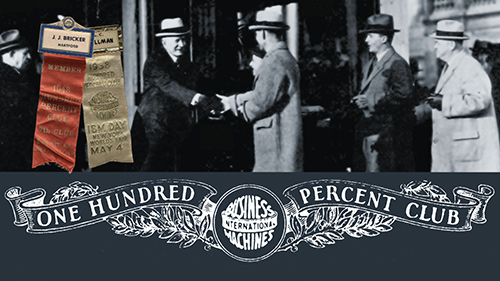 Time clocks for recording employee working hours were made by the International Time Recording Company starting in 1900. In 1911 it merged with the Computing Scale Company, which made retail weighing scales, and Herman Hollerith’s Tabulating Machine Company, which made punched card equipment. The merged company was renamed the International Business Machines Corporation (IBM) by company president Thomas J. Watson, Sr. in 1924. Accounting machines were electromechanical data processors that could read punched cards, compute sums and subtotals, and print reports. They were “programmed” by plugging wires into large control panels, and could be connected with a thick cable to a Summary Punch machine so that the totals accumulated were punched onto cards for later processing. IBM sorters have one input hopper for the cards to be sorted, and 13 output bins – one for each of the 12 possible hole positions in a column, and one for rejects or unpunched cards. This popular Type 82 sorter could process 650 cards a minute and leased for $55 a month in 1957.