Aerospace firms like Martin-Marietta used analog, digital and hybrid computers to simulate missile guidance and fire control systems. For example, the Tactical Avionics System Simulator used a hybrid computer for helicopter simulations. The cockpit can be seen in the background.

We see history in the rear-view mirror. Earlier inventions often seem merely steps on the path to today’s technology. Yet analog computers weren’t just the ancestors of digital. They were powerful calculating instruments with unique strengths.

Analog computers, which measure continuous values, excel at modeling the physical world. Many engineers preferred analog well into the age of microprocessors and digital computers. Richard FitzHugh at the National Institute of Health

Analog computers were used for more than modeling engineering problems. Scientist Richard FitzHugh used them to build analogies to the electrical characteristics of neuron cells. His work resulted in a new simplified but effective model. Vendors of analog computers offered detailed examples of how their machines could be used for specific applications. These, from EAI’s library, cover electronic, bio-medical, nuclear and aerospace engineering problems.

An analog computation simulates a real-world problem. Both mechanical differential analyzers and electronic analog computers solve mathematical equations that model the problem. Each physical component of the computer does one mathematical operation.

The answers aren't very precise, but the operator can interactively change the model or its parameters and quickly see the consequences. At a time when digital computers were expensive and slow, this combination of low cost and high speed made the analog approach very appealing.

As digital computers became faster, cheaper, and more interactive, however, they could solve the same problems efficiently by programming sequential steps for each mathematical operation—in effect, simulating the simulation. And because digital computers use large numbers to count discrete units, their results are more precise. That precision, and the additional flexibility that comes from having the model created entirely in software, eventually made analog computers mostly obsolete. 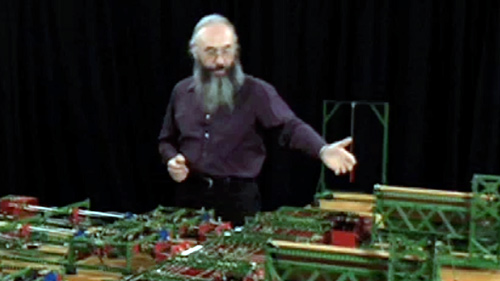 Why Are They Called “Analog”?

When you say that Superman flies like an arrow, you’re making an analogy—observing that one thing resembles another. The term “analog” derives from ”analogy.”

General-purpose analog computers represent a real world system with an analogous mathematical model. They then calculate solutions using continuously changing voltages or mechanical motion instead of discrete values of zero and one.

How to Use an Analog Computer?