SRI engineer Bill English built the first Engelbart mouse prototype, which used knife-edge wheels and had space for only one button.

Trackballs, light pens, and other clever pointing devices were widespread. Then the mouse was invented. Twice. (Well, at least twice.)

Doug Engelbart reportedly conceived the mouse during a conference lecture in 1961. His first design, in 1963, used rolling wheels inspired by mechanical area-measuring devices called planimeters invented in the 1800s.

Engineers at Germany’s Telefunken also invented a mouse in the mid-1960s. First described in 1968, their version used a rolling ball—essentially a small, upside-down trackball—which became the standard for decades. The word “mouse” does not appear in Engelbart’s patent for the computer pointing device that became ubiquitous within 20 years. The knife-edged wheels each rolled in just one direction, transmitting movement information for that direction. Each slid without turning when the mouse was moved in the other direction. The Telefunken Rollkugel may have been the first rolling-ball mouse. 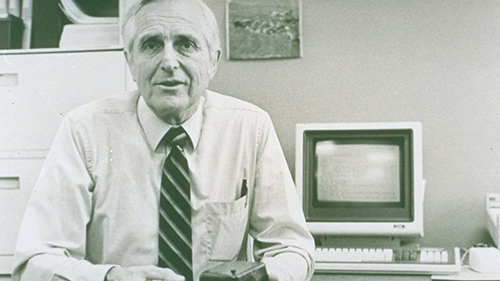 By 1968, SRI had provided Doug Engelbart with commercially produced three-button mice to use in his famous “Mother of all Demos.”

Who Named the Mouse?

When asked who named his most famous invention, Doug Engelbart recalled, “No one can remember. It just looked like a mouse with a tail, and we all called it that.” The wire “tail” originally came out under the user’s wrist. Using a ball from the Canadian 5-pin bowling game, this was likely the first trackball. It controlled radar plotters in a computerized multi-ship defense system designed in Canada. Bill English at the ARC office Bill English moved to Xerox PARC in 1971. His group developed PARC’s first mouse, a rolling-ball design like that of the 1968 Telefunken mouse.

A Menagerie of Mice

The basic idea of the mouse is simple, but there are many variations on the theme. Engineers have experimented with different shapes, numbers of buttons, internal mechanisms, and aesthetics -- as well as with the part of the human body that activates it. Shortly after its founding, Logitech sold this rolling-ball mouse design by André Guignard in the U.S. How many buttons should a mouse have? For 20 years, Apple said “one.” Video-editing system maker Quantel, however, found many buttons helpful for operating its sophisticated systems. Foot mouse users include people with hand and arm problems, and people who want to keep their hands on the computer keyboard or other control devices. The name “mouse” inevitably led to quirky accessories and packaging. This is the internal mechanism of a modern rolling-ball mouse, with the ball removed.