From Cambridge to Café The white and gold sign on Lyons teashops was a familiar sight to many Britons. About 200 shops sold bakery goods at a front counter and hot meals in a cafeteria.

From Cambridge to Café

The teashop chain then made a version for itself: the Lyons Electronic Office (LEO). In 1954, LEO became an independent company selling computers to others. 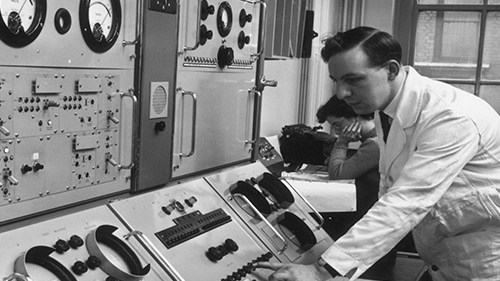 1. How A LEO is Built
2. Uses for LEO
3. Ford Motor Company Payroll Lyons used LEO initially for “Bakery Valuation,” computing the cost of goods and profit margin. The company later added payroll, inventory, invoices, and scheduling duties. But after hours, LEO did secret ballistics calculations for the government. Operators used these displays to monitor the computer’s operation. This tube is from the third LEO II built (one of the first installed outside of Lyons). The computer was used by prominent British steelmaker Stewart & Lloyds for payroll processing.