The founders of HP visit the manufacturing floor in 1963. They were famous for ”management by walking around.”

Hewlett-Packard began as an instrument company, but it was the second-largest minicomputer maker by 1978. One of the few to survive an industry downturn in the 1980s, it absorbed many competitors, including Compaq, DEC, and Tandem.

Founders David Packard and William Hewlett established a legendary culture of open communication, integrity, teamwork, and innovation. The customer was king; sales engineers were instructed to take the customer’s side of disputes with the company. Competitors were respected. Employees were treated as family. The “HP Way,” became a model for many Silicon Valley startups. 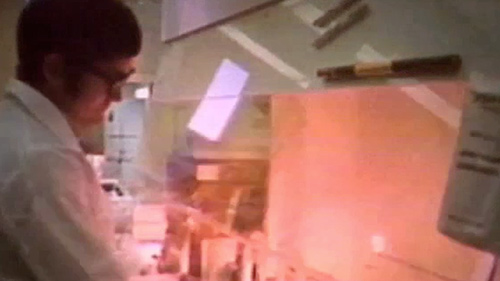 Excerpts from Hewlett Packard's "All the People" Bill Hewlett, center, wears safety eyeglasses while visiting the manufacturing area of the HP complex in 1973. He dubbed this method “MBWA” — management by wandering around. Packard and Hewlett, both Stanford University graduates, founded their company in 1939 in this Palo Alto, California, garage. Their first product was an audio oscillator.

HP Buys Into the Computer Business

HP tried, unsuccessfully, to buy mini-maker DEC. Rebuffed, it instead bought “Data Systems Inc.,” a small subsidiary of Union Carbide, moving five of its engineers from Michigan to California and developing the popular 2116 minicomputer. HP's first computer, the HP 2116A, was introduced in 1966. It was developed as a versatile instrument controller for HP's growing family of programmable test and measurement products. In an early version of -plug and play,- it interfaced with a wide number of standard laboratory instruments, allowing customers to computerize their instrument systems. The 2116A was the largest single mechanical package HP had built to date, and it marked HP's first use of integrated circuits. HP originally designed the 2116 to control its digital instruments. But customers found it effective for other jobs too, which led HP into the general-purpose minicomputer business. At a cost to computer makers of roughly $700, the ASR-33 was a popular input and output device for minicomputers. It was originally designed as a low cost terminal for the Western Union communications network. The first HP minicomputer evolved quickly into three different machines, each with different speeds and capacities.

Computers Listen to the Stars

The Bracewell Observatory in the hills behind Stanford University had five 60-foot diameter radio-frequency telescopes. But although all five pointed at the same object in space, their signals arrived at slightly different times.

The solution? An HP 2116 computer corrected the timing and created a synchronized signal. The HP 2116B corrected the timing of signals being received by the Observatory’s different antennas by adjusting a variable delay line in each signal path so that all signals arrived at the receiver simultaneously.