The Internet Comes From Behind The Internet Comes From Behind

In 1980, the Internet was a medium-sized experiment with 213 computers. As late as 1988, insiders were betting against it. By 1992, it was emerging as the global winner, linking a million computers.

In hindsight, the Internet had key advantages, from a growing community of enthusiasts churning out working software and hardware, to free distribution with UNIX. 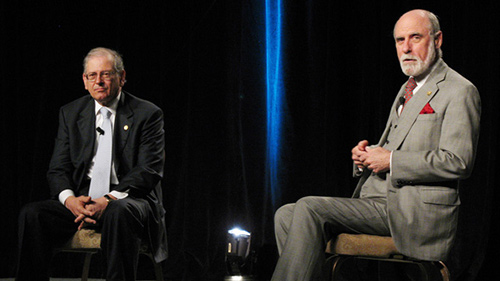 Vint Cerf: The Road to the Internet BITNET (Because It’s There Network) magazine

At its 1991 peak, this academic network connected 500 organizations and 3000 nodes on four continents. It was a slow but easy-to-set-up “store and forward” message network. NSFNET inspired existing academic networks to join the Internet. A major addition was England’s pioneering JANET (Joint Academic Network), which linked British schools. NFSNET grew quickly, and served as a transition between the military-funded ARPANET and the commercial Internet. Gore’s High Performance Computing and Communication Act of 1991 created the National Information Infrastructure, which promoted and funded over $600 million of various networking initiatives. Gore called it the “information superhighway.”

Worms and Viruses: Dark Side of the Net

In a wired world, malicious users are connected too. That stark fact came clear in 1988 when the “Morris Worm” infected over 6000 computers in hours.

The possibility had been predicted in the 1960s and demonstrated in the 1970s. The name “worm” was inspired by John Brunner’s 1975 novel, Shockwave Rider. In 1990, Robert T. Morris (then 25 years old) was the first person convicted under the “Computer Fraud and Abuse Act” after he created the first worm to have a major effect on real-world computer systems. It brought down much of the Internet and related networks for days. Morris apologized in 2008, saying he'd sought to estimate the Internet's size, not cause harm. The Shockwave Rider, by John Brunner

British science fiction author John Brunner’s influential cyberpunk-like novel made prescient predictions about computer networks, including the existence of destructive worms. In the book, privacy and liberties are initially stifled by an all-pervasive network.