Engelbart’s lifelong goal was to make computers into tools that would augment human intelligence for solving universal problems. His lab pioneered the mouse, multiple windows and networking.

A Web-like system for organizing information must be a fantastic idea. After all, it’s been invented at least a dozen times since the microfilm-based Memex of the 1940s.

Some systems garnered millions of users and billions of dollars. Some didn’t. But only one, the World Wide Web, ultimately prevailed. 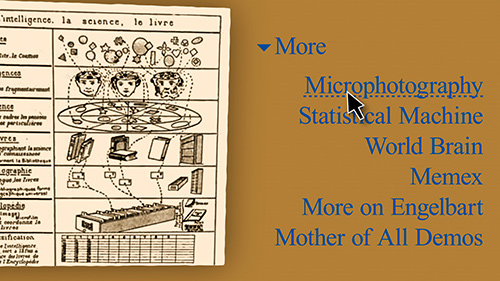 As the volume of world knowledge became too vast any one person to know or catalog, a passion to organize, cross-reference, and share information arose in the hearts of some visionary technologists. Discover the ideas, inventions, broken dreams, and altruistic visions that led to today’s hypertext world.

Information systems based on paper and microfilm were enormously difficult and expensive to build. In the 1950s, Ted Nelson and Douglas Engelbart independently suggested using computers instead.

They “computerized” the concept of cross-references, creating the clickable link we use on the Web. Nelson called it a “hyperlink,” and the computerized text “hypertext.”

Nelson and Engelbart both envisioned multi-user systems embracing elements of networking. They, and graphics pioneer Andries van Dam, developed many core computing functions such as word processing, remote collaboration, and elements of the graphical user interface. Computer Lib : You Can and Must Understand Computers Now / Dream Machines : New Freedoms Through Computer Screens - A Minority Report

In 1974 most computers were corporate, not personal. Computer Lib urged people to claim computer power for themselves. Dream Machines introduced ideas for hypermedia in video and education, as well as Nelson's vision for a global hypertext publishing system called "Xanadu".

Hypertext: Text which is not constrained to be linear, or even to be text.

—Attributed to Ted Nelson,, co-inventor of hypertext, who coined the term As founding head of Brown University's Computer Science department, graphics pioneer van Dam and his students kept hypertext research alive for the twenty years before it became widely known in the 1980s. NLS was Doug Engelbart's system for word processing, hypertext, group collaboration and more. Terminals featured a monitor that could display graphics in addition to text, a mouse and a five-button key set. HES was a pioneering hypertext system and word processor written by Andy van Dam’s Brown University lab. Though based on his ideas, Ted Nelson disavowed it as being incomplete.

The Secret History of Hypertext

“Click here.” Today’s hyperlink is a brilliant breakthrough from the 1960s. Hopping between linked pages is what lets us “surf” the Web instead of plodding through it. Yet hypertext virtually disappeared for 20 years, and was so obscure that the father of the Web may have unknowingly re-invented it in 1980.

Hypertext’s inventors -- and some true believers -- kept using it, but mostly in academic applications, or for specialized clients like the military. Most people weren’t aware of hypertext until commercial systems like Apple’s HyperCard in the late 1980s. And, later, the Web. Hypercard was the first hypertext program to hit the mass market-- 25 years after its invention. Not networked, and with only simple linking, it offered a well-designed scripting language that made hypertext authoring accessible to amateurs. Microcosm, like competitor OWL Guide, was a full-featured but standalone hypertext system which had some commercial success. Microcosm was developed by University of Southampton, UK, researcher Wendy Hall, a leader in the hypertext and later Web communities.