Games On Your TV?

Odyssey and Brown Box designer Ralph Baer in his lab

Ralph Baer holds 32 patents, some for games, but also some for programmable record players and video processing.

Games on Your TV?

Computers in the early 1960s weren’t strong on graphics. So Ralph Baer, an engineer and division manager at Sanders Associates, came up with an alternative.

Tinkering in his spare time, Baer developed a home gaming system in 1966 built in a brown box. He called it “Brown Box.” The device, more innovative than its name, used a standard TV as its display.

Magnavox bought Baer’s design and in 1972 released the TV-based Odyssey game system. It sold poorly, however, thanks partly to inadequate marketing, partly to a misconception that it worked only on Magnavox TVs. Odyssey sales recovered, however, after a successful advertising campaign and over 350,000 Odysseys were sold. These drawings were used as evidence in the lawsuit against Atari. Plastic overlays that stuck to a TV screen by static electricity augmented Odyssey’s limited graphics. Clear areas in the overlay allowed light from the screen to shine through. Ralph Baer with his inventions

German-American inventor Ralph Baer was the designer of many games, including the Magnavox Odyssey, Maniac, and Simon. He received the National Medal of Technology in 2006. 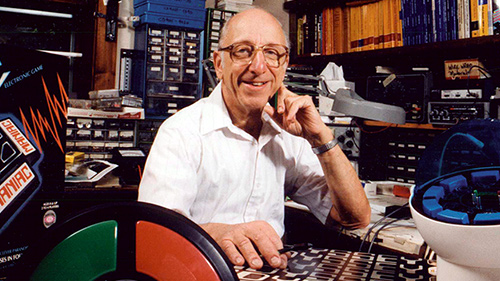 Ralph Baer and his Innovations: The Story of Odyssey Ralph Baer created the first home gaming console, which he called the “Brown Box,” while working for Sanders Associates. It could play several games, including a table tennis game that presaged Atari’s Pong, without requiring a computer, microprocessor, or software. The Brown Box also had a light gun add-on for shooting games. The idea of using a TV to play video games first occurred to engineer Ralph Baer while designing a projection TV for the Loral company in 1951. But Baer didn’t begin designing a prototype game system until 1966, and it was another five years before he licensed it to Magnavox. Odyssey could only draw simple images on the TV, so players attached plastic overlays to the screen to provide the game background. Odyssey used just electronics—no microprocessors or software.

Will Crowther wanted to create a game for his daughters in 1975. He used FORTRAN on a PDP-10 timesharing system to write a text-based role-playing game set in a cave. Crowther borrowed elements from Dungeons & Dragons, created a cavern based on a Kentucky cave he knew as a spelunker, and called it Adventure.

Adventure spread quickly through universities and labs. At Stanford, Dan Woods enjoyed the game so much that he got Crowther’s permission to expand it, creating a version that blazed through the ARPAnet and was later adapted to varied systems. The introduction screen to Will Crowther’s Adventure

Crowther was an experienced caver, and Adventure was inspired by his explorations of Mammoth Cave in Kentucky. Adventure influenced many text-based games that followed. To keep track of the areas she had discovered, an Adventure player Mari Michaelis drew this map of Colossal Cave, the game’s fictional setting. Listing of the source code for Adventure