While Dabney and Bushnell founded Atari together in 1972, both would be gone from the company by 1980. Dabney left in 1973, believing the market was unstable; Bushnell left in 1979 after having sold the company to Warner Communications.

Warner Communications bought Atari in 1976. When a market glut crashed the game industry in 1983, Atari tried to cope by shifting its focus to home computers, a stopgap on the road to declining profits and further mergers. 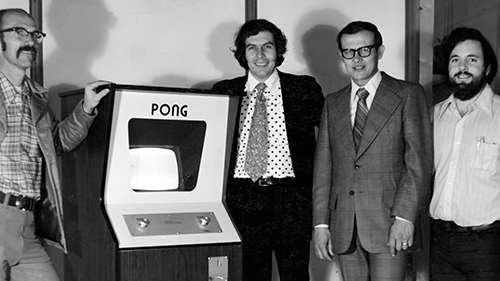 Al Alcorn: Atari in the Beginning Steve Mayer and Ron Milner built this prototype system for the Atari 2600 Video Computer out of a standard “Jolt” card that used the 6502 microprocessor. The primitive video hardware gave it a reputation as one of the most complex machines to program. Developers wrote and assembled software on a DEC PDP-11 minicomputer, and then downloaded it for testing. The first program developed, a forerunner of the classic “Combat” video game cartridge, shipped with the 1977 release.

Nolan Bushnell’s eccentric management style—encouraging odd hours and no dress code—made Atari a lively workplace. The hot tub in his office helped too.

After selling Atari to Warner Communications in 1976, Bushnell’s next inspiration was to marry games with pizza. In 1977 he founded Pizza Time Theater, the Chuck E. Cheese game and pizza chain. More than 500 games were eventually available for the Atari 2600, including Superman, Space Invaders, and Pac-Man. Missile Command was one of Atari’s most popular games, both in arcades and for the 2600 home console. It challenged players to launch missiles to defend six cities while being attacked by missiles from outer space. By 1982, the Atari 2600 game console was losing out to newer competitors such as Intellivision and ColecoVision. The 5200, based on the Atari 400 home computer, was an attempt to regain market share. It sold poorly, however, thanks to design flaws and lack of compatibility with existing 2600 games. Defender was the first popular “side-scrolling” arcade game. Created by pinball designer Eugene Jarvis in 1980, it also was a big hit later for the Atari 2600 home gaming console. This drawing shows game owners how to locate the unit’s serial number. Tempest was one of Atari's successful shoot-‘em-up arcade games, featuring color vector graphics and high-speed gameplay. It was the first game with a “continue” function that let players pick up where they left off after being “killed.” The Video Game Crash of 1983 was triggered by a combination of poor game quality and oversupply. The video game industry did not recover until after the introduction of the Nintendo Entertainment System in 1985. The Atari 2600, initially called the Atari Video Computer System, shipped with this multi-game cartridge that held two popular arcade titles: Tank and Anti-Aircraft II. Although the 2600 was not the first home game console to use a microprocessor and removable game cartridges, it helped establish that as the standard. Space Invaders was a major hit for Taito, a Japanese game company originally founded in 1953 as a trading company by a Russian Jewish businessman. Breakout was one of the most popular games in the long history of the Atari 2600. Head Engineer Al Alcorn, assigned Atari employee Steve Jobs to design the single-player game, which was similar to Pong. Jobs in turn asked his friend Steve Wozniak to do it. But Wozniak’s design proved too difficult to manufacture – or understand - and another team designed the final version. Space Invaders, developed by Taito and then published by Midway, was a major arcade hit following its release in 1978. The Atari 2600 version of the game proved even more successful, leading to a major up-tick in the sales of Atari 2600 systems. Atari first introduced Video Pinball in 1977 as a dedicated console able to play seven different video games. In 1980 it was released for the Atari 2600. Some people complained that the controls were too difficult to use.