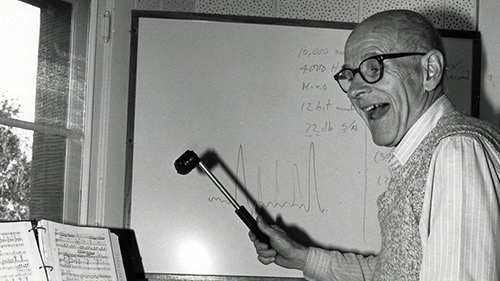 Max Mathews hooked up his violin to an IBM 704 computer in 1957 and fiddled into the history books. He probably was the first to capture and synthesize sound from a live instrument for a computer composition.

Mathews joined Bell Labs in 1955 as an Acoustic Researcher. There he developed MUSIC, the synthesis program he demonstrated in 1957 with a 17-second composition.

Mathews also designed Groove, a system used throughout the 1970s for creating and manipulating music, as well as Radio Baton, a device for conducting MIDI music files. Max Mathews began his career with a ScD in electrical engineering from MIT, composing music on the IBM 704 mainframe computer in his spare time at Bell Laboratories. Mathews made seminal contributions to the fields of computer music, synthesis, acoustics and performance throughout his life. Max Mathews with the Groove system

Groove was a real-time music performance system built by Max Mathews and Richard Moore. Filling two rooms at Bell Labs, it used an analog synthesizer to produce the sounds. Max Mathews with his Radio-Baton

The Radio-Baton, developed by Mathews in the late 1980s, tracked the movements of a performer using two radio-transmitting batons. The performer's movements could be used to remotely control musical instruments.