The AARON Paint System was ever-evolving and by the mid-1980s had a set of rules that allowed it to draw figures situated in quasi-realistic ‘gardens.'

London’s Tate Gallery mounted a cutting edge show in 1983. More remarkable than the artwork, however, was the artist: AARON, a robotic arm and software system created by Harold Cohen.

A British born artist, Cohen became involved in artificial intelligence, spent two years at the Stanford Artificial Intelligence Lab, and developed the “freehand” AARON paint system. Its early artworks were simply outlines, which Cohen colored by hand. Later generations of AARON did all the work.

The system sparked heated debate. Was the artist AARON? Or was it Cohen, who created AARON’s program? Harold Cohen at the Computer Museum

Cohen was a well-established English painter when he became interested in computer-generated art in the late 1960s. His drawing program “knew” the general shape of trees and how they grow, plus broad rules for faces and body positions, and then improvised. Artist Harold Cohen built a succession of machines to draw what his software created. This one — with an arm that selected a brush, dipped it into one of 12 paint tubs, and painted — took about four hours to complete a work. 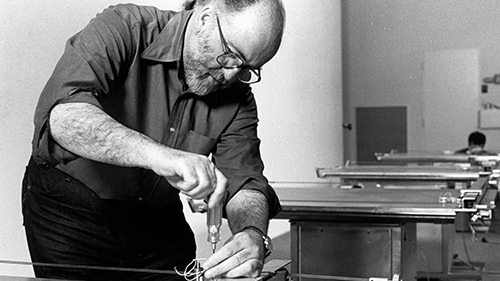