How Did RAMAC Work? 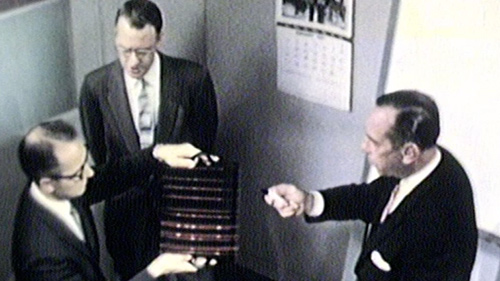 The Search at San Jose

How Did RAMAC Work?

Storing data on magnetic tapes and drums was well established by 1957. IBM’s RAMAC team adapted the principle of magnetic storage to a spinning disk. Or rather, 50 spinning disks, each two feet across.

A moveable arm held two magnetic heads that read and wrote data—one head for the underside of disks above the arm, one for the tops of disks below the arm. Continuous airflow from a compressor prevented the heads from touching the disks.

It took, on average, only 0.6 seconds to retrieve a piece of data from anywhere on RAMAC. RAMAC used compressed air to “fly” the read/write heads at a controlled distance from the disk surface. Modern drives use the airflow generated by the spinning disk. This engineering model from IBM’s San Jose, California lab proved that a rotating, magnetically-coated disk stack could be used to store data reliably. This is one of 50 aluminum disks used in the RAMAC disk drive. A special coating allowed bits to be recorded as magnetized areas. This shows the “spin-coating” technique IBM used at the early experimental stage to apply a magnetic surface to metal disks for RAMAC. More advanced and automated coating techniques were used once RAMAC was in production.