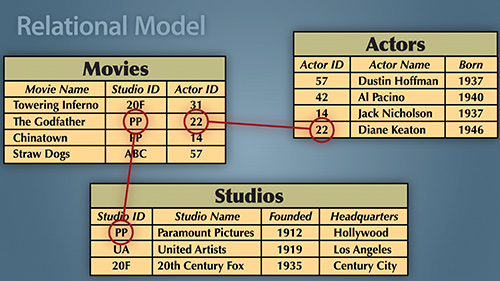 Every hour, every day, digital databases quietly store, cross-reference, and return information on every aspect of our lives. Discover the history of these powerful tools, including one man’s struggle to convince his employer listen to his idea – the idea that led to a billion dollar industry.

The more information a computer holds, the more essential it is to arrange and organize that information in manageable ways. Databases, which create collections of easily searched “records,” can be structured in many ways—by relationships, in hierarchies, or other methods. Larry Ellison bet $2,000 on an idea he’d read in a paper by mathematician Ted Codd about organizing information in relational databases. With co-founders Robert Miner and Ed Oates, he created a database software firm. By 2000, that company—Oracle—was the world’s second biggest software company, after Microsoft.

The company debuted in 1979 with Oracle V2. There was no “V1.” The “V2” was a marketing ploy to create the illusion of a more mature product.

Oracle narrowly avoided bankruptcy in 1990, but the company’s ultimate success underscores the importance of databases.