The Next Generation: Semiconductors 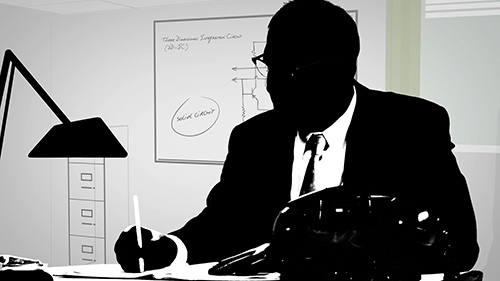 The powerful and ubiquitous silicon chips that run the computers, smart phones and even the cars and appliances we use daily all spring from the transistor. This video presents an overview of the 60-year history of innovation, invention and development that took us from vacuum tubes to modern microprocessors.

The Next Generation: Semiconductors

Smaller. Cheaper. Faster. Cooler. The invention in 1947 of semiconductor transistors -- miniature electronic devices based on the principles of solid-state physics -- brought a remarkable new alternative to vacuum tube amplifiers and switches. This photomicrograph shows the first planar transistor, built by Jean Hoerni in 1959. The Opteron 6100 12-core microprocessor chip contains 1.8 billion transistors. It was built with a process that evolved from the one used about 60 years earlier for the first planar transistor. Close-up of the 1.8 billion transistors on the AMD Opteron 6100.

What is a Semiconductor?

There are two basic types of materials: conductors, which let electricity flow freely, and insulators, which don’t. Semiconductors have a foot in both camps. Their conductivity can change depending on electrical, thermal, or physical stimulation. This lets them act as amplifiers, switches, or other electrical components.

British physicist Michael Faraday experimented with semiconductors in 1833. German physicist Ferdinand Braun discovered in 1874 that galena crystals could function as diodes, letting electricity flow in just one direction. Indian physicist Jagdish Chandra Bose patented its use as a crystal radio signal detector in 1901. Faraday, who discovered the principle behind the electric transformer and generator, described in 1833 an “extraordinary case” later identified as a semiconductor effect. Bose was born in what is now Bangladesh. His U.S. patent for a “detector of electrical disturbances” was the first ever issued to someone from India. Children listening to a crystal radio

Crystal radios gave children access to ideas and entertainment from beyond their local communities. In addition to discovering the point-contact diode and inventing the cathode ray tube (CRT), Braun received the 1909 Nobel Prize in Physics for his work on wireless telegraphy. The first commercial semiconductor device, a crystal radio detector diode, was commonly known as a “cat’s whisker” detector. Vacuum tubes eventually replaced it in most radio applications, thanks to their more predictable operating characteristics. Semiconductor detector diodes regained prominence in World War II because of their ability to function at radar microwave frequencies.

Learn more about these early discoveries and uses of semiconductors