Andrew Grove, Robert Noyce and Gordon Moore pose behind a mask design of the 8080 microprocessor in 1978.

Commercial success rests on the ability to develop new technology… and the vision to recognize its potential.

Intel, seeing the potential for sales to other customers, secured marketing rights. They introduced this groundbreaking microcomputer chip family to the world in 1971 as the MCS-4 Micro Computer Set. The 4004 chip was manufactured on 2-inch diameter, p-channel silicon gate MOS technology wafers with a die size of 12 sq mm and minimum line width of 10 microns. Masatoshi Shima worked for Busicom Corporation in Japan. In 1970 he was assigned to assist Federico Faggin on the 4004 chip design. This engineering prototype was the successful test bed for the first commercial application of the Intel 4004 microprocessor. The prototype, shown with all four members of the MCS-4 family visible, was presented to Intel project leader Federico Faggin by Busicom president Yoshio Kojima. 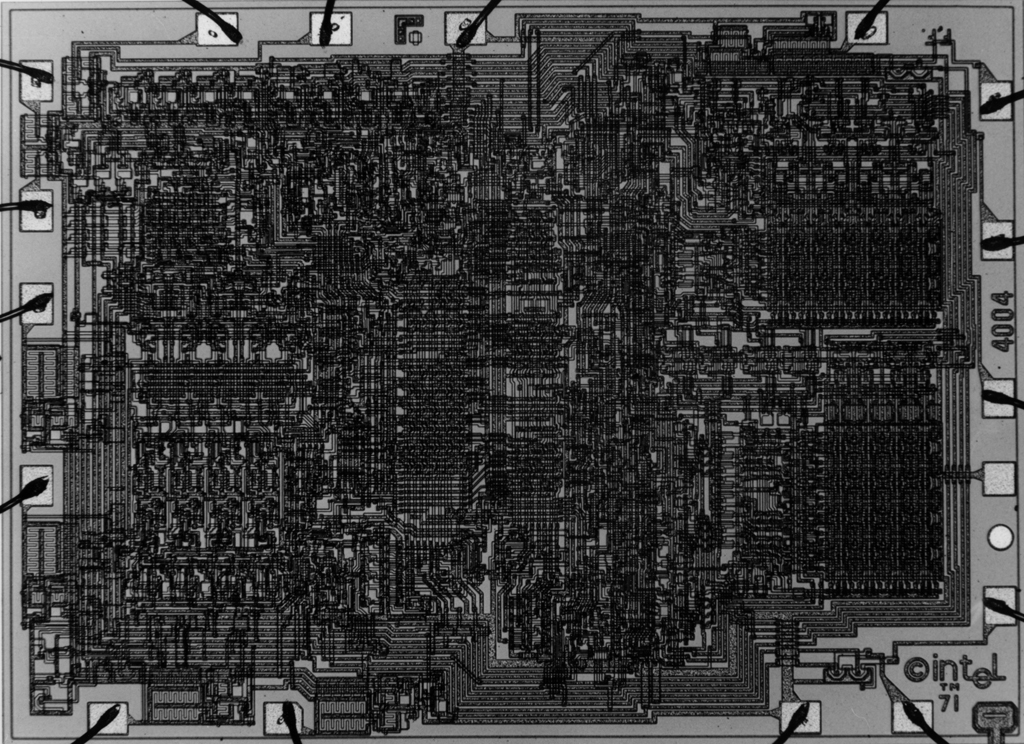 Federico Faggin was born and educated in Italy. He joined Intel in 1970, where he was the principal designer and the project leader of the MCS-4 chip set. After joining Intel in 1969, Stan Mazor worked for Ted Hoff developing architecture specifications for the 4004 and 8008 microprocessors. This advertisement for the first commercially-available microprocessor appeared in Electronic News in November 1971.

Consumers generally buy products with little thought to who made the individual components inside. Intel changed that equation in 1991 with its bold “Intel Inside” campaign, making the company a household name.

Intel’s ultimate dominance as the largest chipmaker, along with Microsoft’s as the leading PC software company, reshaped the industry from vertical (each company making everything) to horizontal (specialists making each element). The Pentium chip in this keychain was from a batch of ICs rejected because of a subtle error in their design—the “FDIV Bug—a defect that inspired widespread criticism of Intel. On the back of the keychain are these words from Intel CEO Andy Grove: "Bad companies are destroyed by crises; Good companies survive them; Great companies are improved by them." Intel celebrated 35 years of innovation in 2003. The unique and highly successful “Intel Inside” campaign created brand loyalty for a component that few consumers had ever seen and even fewer understood. This button promotes Intel’s single-sourced i386 over its competitors’ x86 processors.